In general, there are two types of machine learning: supervised and unsupervised. They’re pretty self-explanatory:

Artificial Neural Networks (ANN/NN), are a type of supervised machine learning model inspired from neurons in animal brains. In general, they:

Each node in a neural network represents a neuron. Neurons exist in 3 types of layers:

For the best result, separate the data into two parts: a training dataset (~80% of total data) for the model to train on, and a validation dataset (the remaining ~20%) to see how a trained model performs on unseen data.

In order to calculate an output, the model has to send the inputs through each layer of the network, one by one. As the input is passed through each node, it goes through a complicated mathematical equation.

Just like how a real neuron either fires (represented by a 1) or doesn’t (0), a network’s activation function, represented as $\sigma(x)$, can simulate “firing” by normalizing output to a certain range like $(0,1)$ or $(-1,1)$. There are many common activation functions and each have their own advantages.

In a network with $n$ layers, the network will process the input layer $l_1$ first, then hidden layers $l_2$, and so on through $l_{n-1}$, until reaching the output layer $l_n$. In this way, layers become dependent on previous layers.

Finally, the output of neuron $a^l$ is defined as the activation function $\sigma(x)$ applied to the weighted input $z^l$.

Neural networks are a form of supervised learning, so once the neural network processes all inputs through the network, it compares the outputs it generated to what it should have generated.

This comparison requires a function that can calculate the difference. That special function is called a loss function.

The goal of the network is to reduce the difference between what we have and what we want; this difference is called the loss or cost, which is calculated using a loss function or cost function.

One common loss function is the mean squared error (MSE):

Squaring the difference makes it positive and also pronounces it.

Optimization refers to the process a neural network goes through in order to improve. There are multiple Optimization Algorithms that each work a little differently, but the most common algorithm is known as Gradient Descent.

Optimization takes a lot of time and processing, so it doesn’t always occur after every sample is processed: the batch size is the number of samples the model should work through before undergoing optimization.

Each algorithm has its pros and cons. In general, it is recommended to use mini-batch learning, because it is faster and more stable than stochastic learning and does not require all data to be present when training like batch learning.

#Step 5: Check: Are We Done Training?

A single epoch represents a cycle through all of the training data. It can take anywhere from <1 to 1000+ epochs to finish training, so how can we know when the model is sufficiently trained?

If the model is trained too little or too much, problems will arise:

Undertraining results in underfitting, which is when the model cannot adequately capture the patterns that exist within the training data.

Overtraining results in overfitting. This means the model has produced a function that fits too closely to the training dataset; it has found patterns in the dataset that were not meant to be found. Think of this as the model “memorizing” the dataset rather than actually “learning” it.

For example, let’s say you want to train a model to produce English baby names, but most of your training data contains names that start with A. At first, the model might learn how to string together vowels and consonants to create syllables; next, it might learn that names do not contain punctuation.

Stopping training here would result in an underfitted model, because there are many more patterns that are yet to be learned. Eventually, it learns more common name patterns. However, if trained for too long, the model might start to find patterns it was never meant to. It may eventually think that because most of the baby names it sees start with an A, all baby names must start with an A. At this point, the model has overfit the training data.

In order to prevent undertraining or overtraining, we can use Early Stopping. The purpose of the validation set (~20% of your data) is to provide an unbiased evaluation of a machine learning model’s effectiveness. By periodically testing our model against this set, we can see whether or not it is overfitting the training data.

When effective training is completed, we are left with a neural network that is able to receive completely new input and use what it has learned to output sensible values. The applications of this type of machine are endless; we’ve only begun to see the power of machine learning. To see a cool showcase of AI, check out AI Dungeon. 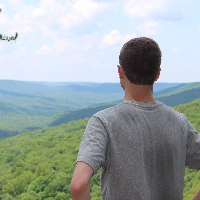